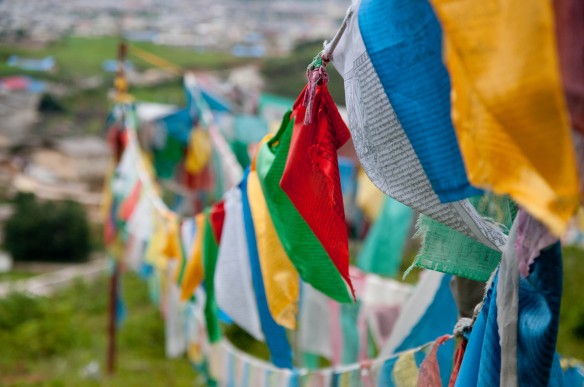 In late July of 2010, a colleague and friend of mine attended and spoke at an academic conference at Yunnan University in Kunming. Since we were in a wonderful and scenic part of China, we decided to take some time after the conference to do some trekking. We both have interest in Tibet and the border regions of Tibet where about half of all Tibetans live. Yunnan Province in China’s southwest has three Tibetan Autonomous counties. One of my former students had traveled to the Shangri-la region in upper northwestern Yunnan and the region seemed really interesting with a high Tibetan population. My friend had also visited the city in the 90’s.

In 2001, in order to attract tourists, the city of Zhongdian 中甸 zhōngdiàn was renamed Shangri-la 香各里拉 xiānggēlǐlā. The name Shangri-la came to the west from the novel written by James Hilton about a mysterious Himalayan utopia isolated from the world. Several places in the Himalayas have been thought to be this place described in his novel, but only China was brazen enough to actually name a town Shangri-la.

In the old days, (in the 90’s and previously) Zhongdian was a dusty, almost one street town, where it was not uncommon to literally see Kham Tibetan “cowboys” ride into town on their horses. The old town consisted of narrow winding alleys through a large cluster of old wooden frame buildings.  After 2001, that all changed as the Chinese spent millions of yuan “improving” the city. These improvements included completely rebuilding the old city gearing it toward the tourist industry, widening streets, building luxury hotels, restaurants, an airport, and so on.

After our conference, we flew to Shangri-la from Kunming. We had arranged to stay at a small guest house (Kevin’s Trekking Inn) where my former student had stayed. It was also recommended in the Lonely Planet guidebook. The place was run by a Han Chinese guy and staffed with a couple Tibetans. It was a bit of a mixed bag. The rooms were okay, but the water was unreliable, meaning we only had water for a short time each day, and what we did have was pretty weak and very cold. They claimed that their well was low on water, but we suspected there was some politics going on, that and the fact that the guesthouse was on a hillside where it was probably more difficult to get water.

Our first objective was to visit the large Songzanlin Monastery 松赞林寺 sōngzànlín sì outside of town. We took a local bus that ran the length of one of the main roads in town up to the monastery. The bus was full of Tibetans. It made a mandatory stop at a new building where we were forced to get off and buy a ticket to the monastery (all part of the tourist plan). From there we boarded another bus that took us up to the monastery. The monastery itself was originally built in 1679, and is the largest and most famous Buddhist monastery in the Kham region of Tibet. It is also known as the little Potala Palace because of its traditional architecture. It sits on the side of a mountain at 10,827 feet. The whole complex consists of the temple, two lamaseries, and a large jumble of small wooden living quarters clinging to the hillside. My friend had visited this monastery in the early 90’s and reported that the monks were very friendly and showed him all around. We were looking forward to this kind of reception but were disappointed that even though we spoke Chinese, we received a pretty chilly reception. They did not seem to be interested in talking to us. I suppose at this point they were tired of all the tourists traipsing around their monastery. 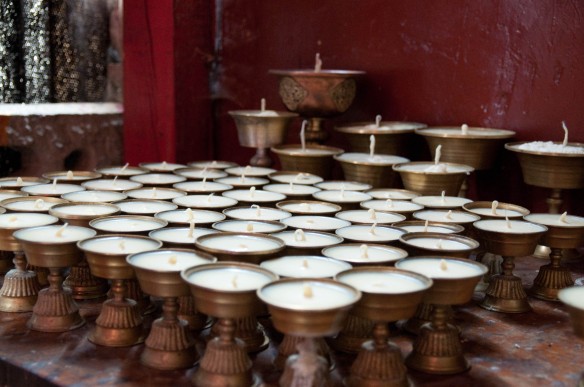 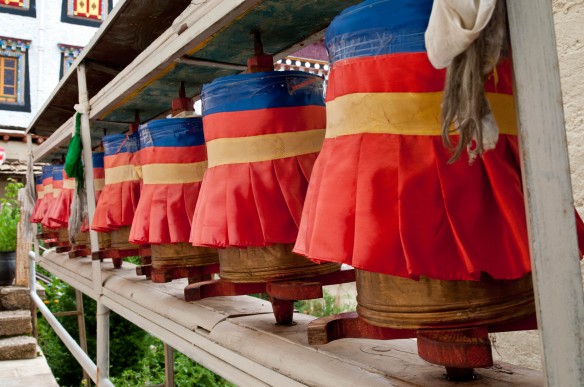 We spent several hours wandering around the complex of temples and houses. All the structures were made of wood and a maze of narrow alleys cut through the dwellings.

Houses around the monastery 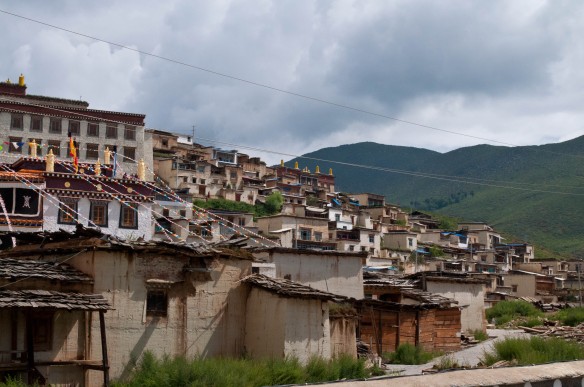 Houses adjacent to the monastery

Behind the monastery were many more houses, many of which seemed to be made of rammed earth and wood.

Houses behind the monastery

We walked through this small village and climbed to the top of the hill behind the monastery. There were the customary prayer flags as well as beautiful views of the valley. 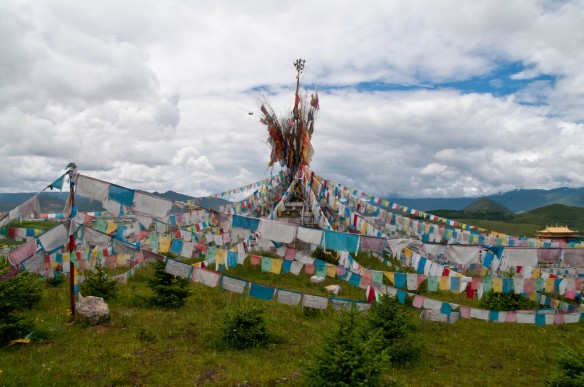 Tibetan Buddhist prayer flags are inscribed with prayers and mantras and are said to bring good luck. The wind carries these prayers across the countryside. For more information on prayer flags see, http://www.prayerflags.com. From the top of this hill there were nice views of distant Shangri-la, as well as distant mountain ranges, and surrounding farm and grazing land.

Shangri-la in the distance

We hiked off the back of the hill down into another valley with a few traditional Tibetan houses. 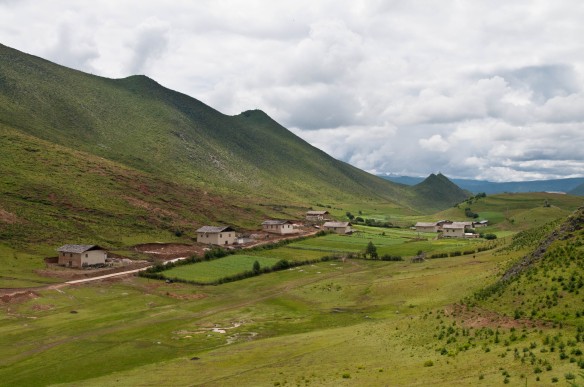 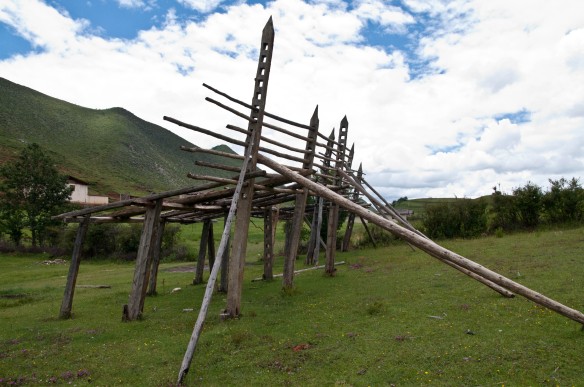 Racks for drying the barley crop

At the end of this valley was another small village full of traditional wooden framed Tibetan houses. These houses consist of a gate that leads into a courtyard. The houses are three stories with animals, (pigs, chickens, cows), on the ground floor, living quarters on the second floor and storage on the third floor. These houses were pretty nice. We would later stay in a much more rustic Tibetan house.

Songzanlin Monastery from a nearby village 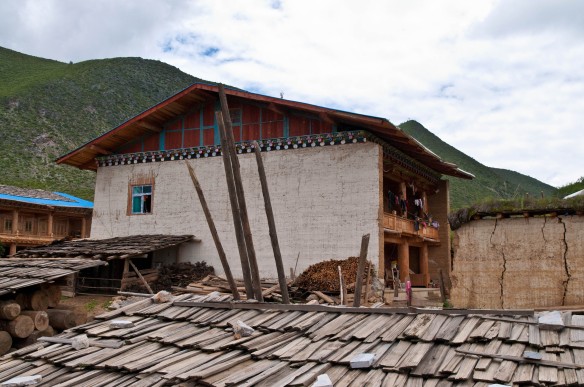 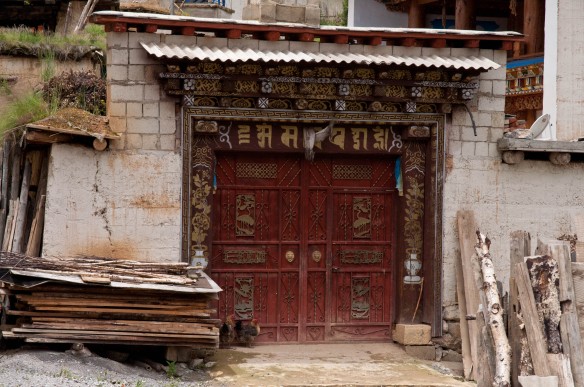 After walking around for most of the day, we were really feeling the altitude and were tired, thirsty and hungry. We found a nearby restaurant and had a pretty basic (i.e. not very good) meal. But it was nice to sit and rest a bit before we took a bus back to Shangri-la.

Monks in front of the small restaurant 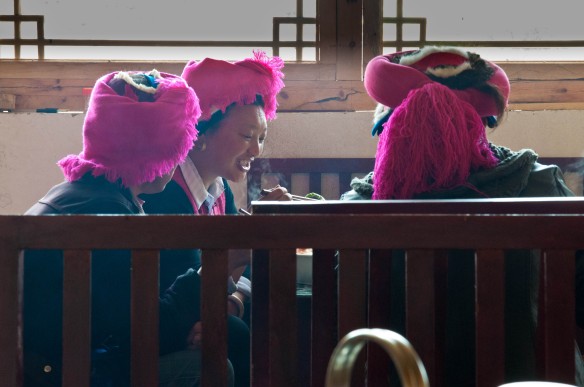 Tibetan girls in the restaurant

I do not recommend that you go poking around in restaurant kitchens in China as they can be pretty unsanitary. But I couldn’t resist a peak into the kitchen of this place. After all it was right next to where we were sitting. They certainly weren’t trying to hide anything.