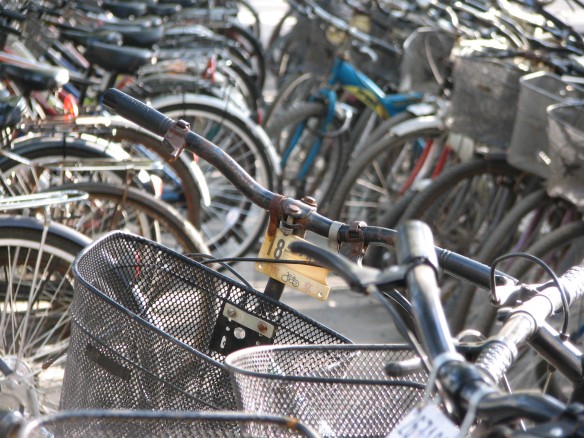 The first time I went to China, in the mid 80’s there were very few cars on the road. Vehicular traffic consisted of busses, blue trucks, a few taxis, and even fewer cars, which belonged to government officials. And there were bikes. Lots of them. In fact, on most streets there were two skinny lanes down the center, one in each direction for cars, then wide bike lanes on each side. These bike lanes were sometimes twice the width of the regular traffic lanes. It seemed like everyone was riding bikes. As an avid cyclist, this suited me well. Rush hour consisted of being literally shoulder to shoulder and wheel to wheel with thousands of other cyclists.

Today there are still lots of bikes on the road, but fewer than there used to be. The bike lanes are narrower, but still substantial, and prominent compared to the US. 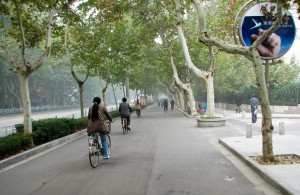 Private cars are becoming quite common in the cities and there are taxis all over the place. There are now many motorcycles, scooters, and electric bikes as well. But bicycles still play an important transportation role for many Chinese. In fact, it can be argued that even in today’s modern China, cycling is still a very convenient and inexpensive way to get around. For many Chinese that is all they can afford. It can even be faster to get around in today’s very congested cities.

Every time I go to China and plan to stay awhile, I buy a bike. I love the freedom of zipping around the city at will. If you are fairly fit it is totally reasonable to ride all the way across a large city. In fact, in the city of Nanjing I would routinely ride from the Gulou area around Nanjing University campus to the markets in the southern part of the city. It would take around 45 minutes one way. (Nanjing is a city of around 8 million people). Of course it helps that I love cycling. In fact, I have been commuting year round by bicycle for 27 years.

Major shopping areas have huge bicycle parking lots. You pay an attendant a small fee and recieve a little paper ticket. You put this on your bike and they watch it for you. When you return, provide the ticket and they let you retrieve your bike. Bikes are also parked along nearly every road in commercial areas.

Compared to the US, bicycles are very inexpensive, especially if you buy a Chinese brand. Popular Chinese bicycle brands include 飞鸽 fēigē Flying Pigeon,邦德富士达 bāngdéfùshìdá Battle, 永久 yǒngjiǔ Yongjiu, 凤凰 fènghuáng Fenghuang, and 捷安特 jié āntè Giant (originally a Taiwan brand). You may be able to find some foreign brands in the bigger cities but you will pay quite a bit more for them. The problem with buying a shiny new bike, is that they are immediate targets for thieves, and bicycles do get stolen pretty regularly. Another option is to buy a used bike. There are used bike markets but the sellers at these markets are really good at ripping people off. The good news is that there are bicycle repair stands all over every city and repairing a bicycle is really cheap compared to the US. I once badly bent a back rim on my bike. It was so out of true that the wheel would not even turn and several spokes were broken. I took it to the repair stand pictured below and the guy had it fixed in about two hours. It cost the equivalent of $4.50 USD. 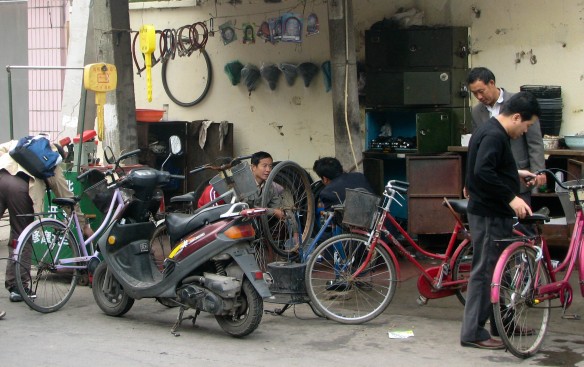 Bicycles are not only used for personal transportation, but also for transporting goods. Cargo bikes are a bit of a novelty here in the US, but in China they are everywhere. The heavier duty cargo bikes often are technically trikes with three wheels. I’ve seen some pretty amazing things on the back of a bicycle, including refrigerators, beds, large cabinets, five gallon water bottles, live chickens, large bags of rice, recycled goods, and so on. Below are a few photos of some cargo bikes. Check out the five gallon waterbottles—count them— 7 on one bike! 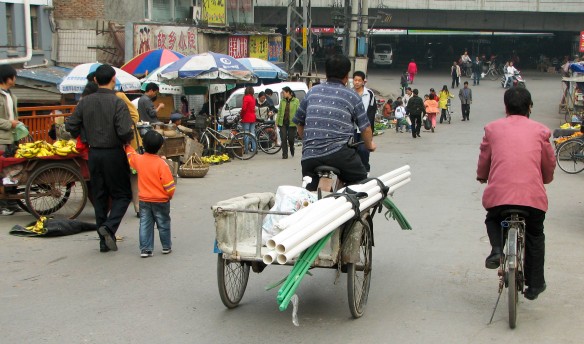 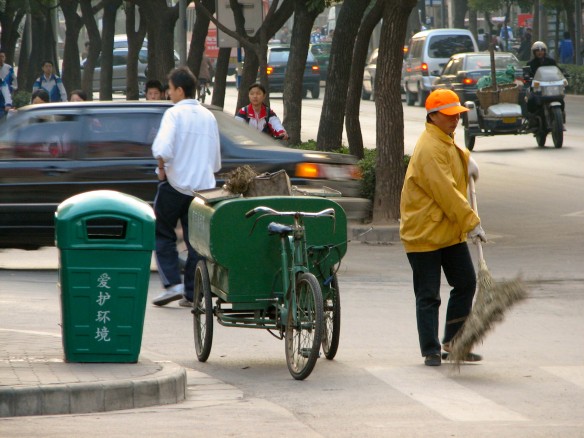 Street vendors will often use bikes to transport their goods and they sell their goods from the back of their bike. 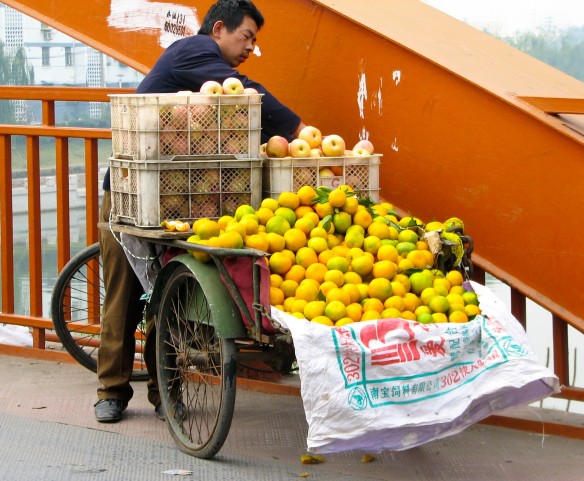 The photo below shows another kind of cargo bike used specifically in Northeastern China. It is called a 倒骑驴 dǎoqílǘ.

The guy in the picture below is a mover. The sign says that he will move furniture, electronics, washing machines, bicycles, water heaters, and a few other things.

I never attempted such a heroic bicycling feat. The closest I came was a few years ago when our family spent a semester in Nanjing. After renting an apartment we needed to get some household goods. My wife and I (she sitting on the back rack) rode down to a local department store and bought sheets, blankets, pillows, foams pads for the boys to sleep on, and a number of other things. I had seen guys pedaling around with huge loads on their bikes so I was determined to get all this stuff home without having to hail a taxi. I got some of the ubiquitous pink twine and we started lashing things down. My wife sat on the back rack holding the foam pads, along with several bags. I had large plastic bags hanging from each handlebar. We slowly and steadily made our way through the crowds back to our apartment, about two miles away. No one seemed to pay us much attention. I wish I had a picture of that.

So, when you get to China, buy a bike and start exploring. It really is the best way to see a city.

11 thoughts on “A World of Bicycles”