After our breakfast of yak cheese, Tsampa, yak butter tea, and curdled milk, we hiked down off the bluff and back onto the road to Niru. It had rained during the night so there were mud puddles all over the road. It was a beautiful cool morning. After hiking for about an hour, we heard a truck approaching. We stepped aside as an old open bed truck pulled up. Standing in the back was the Tibetan girl we had breakfasted with, along with a dozen or so other Tibetans. They were all on their way back up to the mushroom fields. We climbed into the back of the truck and rode with them for about a half hour bumping and pitching along the rough road. When we reached their turn off, we climbed out, thanked them for the lift, and continued our trek.

We were really hungry. The previous day we had only eaten a bowl of instant noodles, some snacks, and a light dinner of stir fried squash and potatoes with our gracious hosts. This valley was certainly much less developed than we anticipated. Our original plan was to hike up into the high mountain Summer pastureland where the local Tibetans herd their yaks. This was looking unlikely as food was proving to be difficult to obtain. The locals were not used to seeing foreigners, or any outsiders for that matter, and were thus hesitant to offer assistance. A farmer we had met the previous day told us that they were developing this valley for tourism with guesthouses, stores, and so on, but that time had not yet arrived.

Hiking the road to Niru Village

Late morning we arrived at an area identified by a sign as 关门山 guānmén shān. This translates loosely as “Close the door Mountain,” probably referring to the narrowness of the valley, seemingly closed off by this rocky peak. The valley narrowed to just a hundred yards wide or so. To the left was a towering rocky peak seemingly blocking off the canyon. Just as we arrived at the base of the peak, the road turned sharply right. The river raged through this narrow part of the canyon. Another turbulent river flowed down from the mountains on the right joining with the Niru River. A narrow bridge, about the width of a single lane crossed this tributary. The river was so high, it tumbled just inches below the wooden bridge.

We had studied some old black and white photographs from the legendary Joseph Rock on one of his expeditions in the late 19th Century. This area seemed to match some of his photographs. There was a small shelter here where we took a break enjoying the roaring of the rivers.

We still were not quite sure what to expect in Niru Village proper. I think we still had hopes that there would be a store, and maybe even a restaurant where we could fill up. All we knew is that the kids told us it was about a five hour walk to the village.

Once we passed through this beautiful narrow canyon, the road began to climb. We climbed steadily for about two hours before the valley began opening up. At a high point on the road, we came to two large piles of mani stones.

Mani stones are usually flat rocks on which is inscribed the six syllable mantra om mani padme hum. This mantra is associated with the bohhisattva of compassion, Avalokiteshvara. Mani means “the jewel” and padme means “the lotus.” The exact meaning of this mantra is tricky to translate. The Fourteenth Dalai Lama has interpreted it as,

This is the mantra often mumbled by Tibetan Buddhists as they finger their prayer beads. It is said to be an indication of your devotion and brings merit to the individual. These stones sometimes form entire walls, or large piles and are often found along pilgrim routes, at junctions, overlooks, or other places considered auspicious. Devout Buddhists will circle these stone piles clockwise while chanting the mantra. 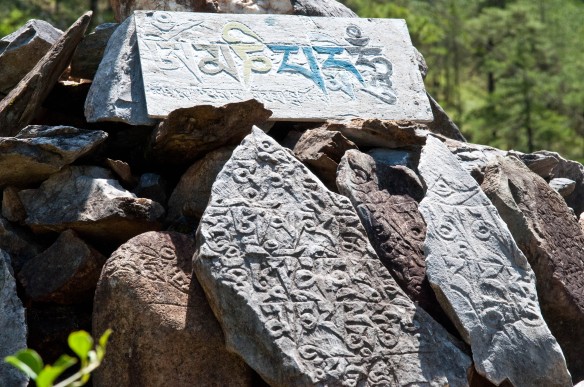 We took another break at the mani stone piles. While sitting along the road here a tractor with a couple individuals in the back, headed down the valley from Niru Village. We later found out the local school teacher was in this tractor heading to a funeral. We had hoped to speak with him about the education situation in the village, particularly the teaching and learning of Chinese among the Tibetans in this area.

In the early afternoon we finally arrived at the head of the valley and the small village of Niru. It was a lovely cluster of farms nestled among high peaks.

The primary school was here at the head of the village. It provided schooling for all the kids up and down the valley. There were dormitories where the kids stayed during the week, then returned home on the weekends. We were disappointed that the teacher was not around, but we knew this was a distinct possibility since is was August and school was not in session. This is the school where the Tibetan kids we stayed with attended. They told us that all the kids in the school were Tibetan. They did learn Chinese in school, but Tibetan was the language of instruction. 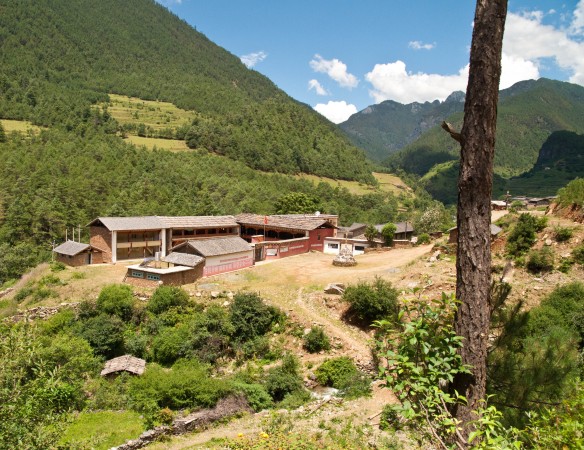 Just past the school we came to a dirty old wooden building. A couple people loitered out front. They informed us that this was a store. We entered the dimly lit ramshackle building to find a very basic store run by an older Tibetan woman. The only food available was instant noodles. We each bought two bowls, as well as some bottled water and Chinese sports drink. 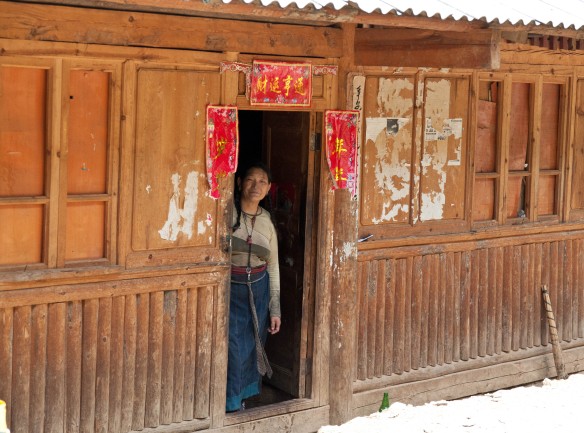 Outside the store a guy told us that there was a guesthouse just a short way up the valley and that he would give us ride in his tractor. It turns out that he was the brother-in-law of the guy who ran a very rustic guesthouse.

We were relieved to learn that we may have a bed for the night, and readily hopped into the back of the tractor trailer. In a few minutes we arrived at the guest house run by a man named Mr. Tian, a Han Chinese. In fact, he was the only Han Chinese person in this village of 658 resident Tibetans. He was originally from Tiger Leaping Gorge and had married a Tibetan woman from the village twenty years ago and had been living there ever since.

Mr. Tian and his wife were separated, so he ran this place on his own, and it showed. It was quite dirty, with rotting food laying around, dirty dishes scattered about, and in general disrepair. We were not complaining though, and Mr. Tian was a pretty interesting guy. It was a typical Tibetan wood-framed house, a courtyard on the ground floor for the animals, up a steep ladder/stairway to the second floor living quarters, and storage on the third floor. Inside the living area was an open fire pit for cooking. On one side of the main room was a row of single beds with basic frames made of 2X2’s. The beds had thick foam mattresses and appeared to be pretty clean. 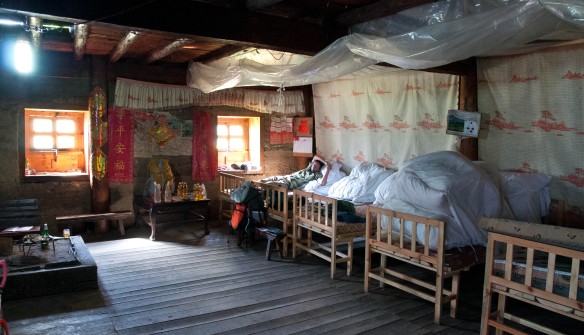 The guesthouse courtyard from the second floor.

Mr. Tian told us that for about the past year, since the road was built, Chinese tourists were beginning to arrive. He had hosted one foreigner the year before. In our wandering around the village we found another guesthouse that was very large and newly built. There was one seemingly pretty rich Chinese family, parents and two kids, staying there.

Mr. Tian owned a horse and lead treks up to a waterfall and a lake in the area. In fact, he told us that he had been hired to lead three Chinese students and a foreigner up over a pass to Shudu Lake the next day. This is where we were headed as well, and he said we could tag along if we like. He told us we would never be able to find the trail without his help.

That afternoon we wandered around the village a bit. We also found the road/trail to the Summer pastures, called 南宝牧场 nánbǎo mùchǎng. According to Mr. Tian, it was a good eight to ten hire hike from the village up pretty steep trails. 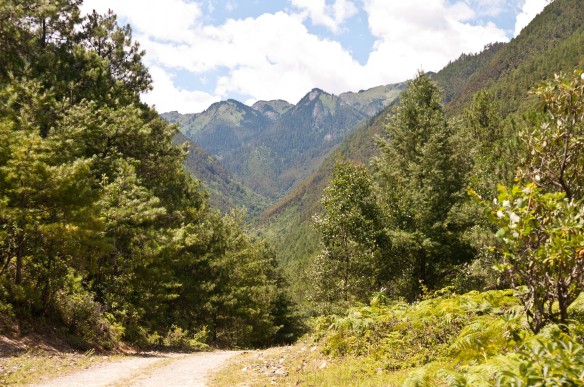 The track leading to Nanbao pastureland. The pastures are the green swaths high in the mountains.

As much as we wanted to hike up there, we had so little food, and nowhere to buy more, other than instant noodles. And by this time we were really hungry. To go up there would be at least a three day trip: one day up, a day to explore, and a day back. We also were not too sure of our route over the mountain pass to Shudu Lake and back to Shangri-la.

Later that afternoon a couple of Mr. Tian’s Tibetan buddies showed up to hang out. I’m not sure what they did for work, and they were pretty reluctant to talk about it. They had passable Chinese. In fact, Mr. Tian’s Chinese was pretty heavily accented, not much better than the Tibetans. One of his friends carried a long, curved dagger on his belt. This is pretty typical of the Kham Tibetans in this area. They are also known for their horsemanship skills as well.

That evening Mr. Tian offered to cook us a meal. That morning he had picked some wild mushrooms. Then he went outside and picked fresh Sichuan peppercorns from a bush in his yard. Our meal consisted of stir-fried mushrooms with the fresh Sichuan peppercorns. (This area of Yunnan was literally right on the border of Sichuan Province). I had never eaten or even seen fresh Sichuan peppercorns. They are most often dried and are dark brown in appearance. This dish was pretty good, albeit there was not much. However, he used way too many peppercorns and by the time we were done, our mouths were literally numb. In Chinese cuisine there are two kinds of spicy, the regular spicy that we are used to, called 辣 là from the word 辣椒 làjiāo, meaning “chili pepper.” The other kind of heat is called 麻辣málà or “numb spicy.” This numbing spice comes exclusively from the Sichuan peppercorn, which is not a chili pepper, nor technically a peppercorn. It produces a pleasant (to some people) tingling, numbing sensation in the mouth. 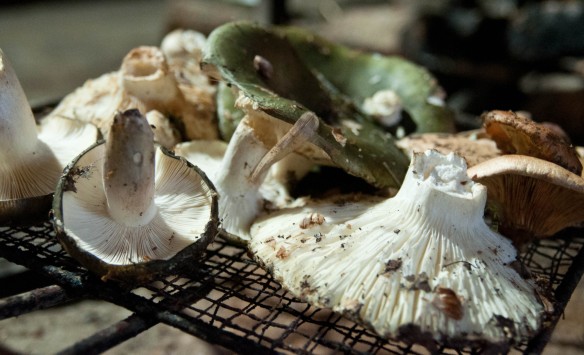 It was nice to have a meal, but it was pretty small and we were still hungry. We planned to get up the next morning and hike along with Mr. Tian and his clients up over the pass and down to Shudu Lake. This lake is within a new Chinese National Park called Pudacuo National Park 普达措国家公园 pǔdácuò guójiā gōngyuán. From there we hoped to hitch a ride back to Shangri-la. 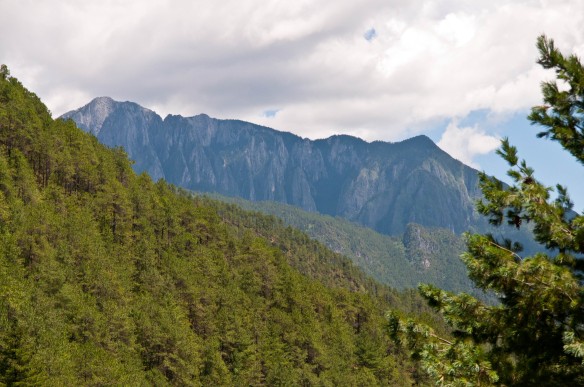 TO BE CONTINUED. (One more post to finish this series)