Back in May when I was in Tibet we visited quite a few Buddhist monasteries. I have always loved temples and monasteries as they are such a nice contrast to the hustle and bustle of life outside, especially those in China proper. They are quiet and peaceful. I have always been drawn to monks as well. I’m interested in their stories, why they decided to become monks, and if they enjoy what they do.

While in the Pochu Monastery in Gyantze I had an interesting discussion with the monk pictured below. He allowed me to photograph him with my iPhone.

I had chatted with him briefly in the main prayer/meditation hall. I had asked him about some prayer beads that were in a glass case. We just exchanged a few words. A bit later as I was walking toward the door to leave, he approached me and softly touched my shoulder. I turned and he asked me if I had a few minutes to talk. It is a great blessing to be able to speak Chinese and talk with these people, even though Chinese is not their native language. Unfortunately my Tibetan skills are very rudimentary, and consist of a few phrases. He led me across the hall to the low padded benches where the monks sit in prayer, meditation, and chanting.

We sat on the low bench in the left of the photo. The benches are covered in wool carpets.

We sat down facing each other; then he asked me a question that totally took me by surprise. He said,

“There is a cell phone brand called Apple. Have you ever heard of it?”

I almost laughed. He said they are made here in China and they are very popular but also very expensive. I told him that I had heard of them and that they are very popular in the US as well and that Apple is an American company. I pulled out my iPhone and showed it to him. Then he pulled an iPhone from inside his burgundy robes and showed me his. I was not surprised that a monk had a cell phone as I had seen many monks talking on cell phones. I was surprised about his interest particularly in iPhones. He asked how much they cost in the US. Then he told me that they cost about 5000 yuan in China, which is about $800 US dollars. I was pretty surprised. I asked him if he liked his iPhone. He replied nonchalantly,

Most of a monks income comes from their families and donations from others. I suspect someone probably gave him the phone.

I asked him about himself. He was 28 years old and had been at Pochu Monastery for the past 13 years. The monastery was built in 1418. He came from a small village about an hour outside Gyantze. One of his older brothers was also a monk and an older sister was a nun. His other brother was at home working the farm growing barley. He had another sister that lived in Lhasa. I asked him why he decided to become a monk. He told me that even as a young child he had always been attracted to the monasteries and temples in the area. He felt something different, something peaceful in these sacred places. His parents sensed this and encouraged him to become a monk. It is common for Tibetan families to have at least one family member become a monk or nun. It brings great merit and honor to a family. He said he enjoyed being a monk and had no intention of ever leaving. Another monk joined us and we chatted a bit longer. Their Chinese was not great, but good enough to communicate.

All Tibetan Buddhist monasteries have a prayer hall where all the monks can gather for instruction from the abbot, chant scriptures, pray, and meditate. The prayer hall at the Pochu Monastery was quite large. It consisted of rows of low padded benches where monks would sit crossed legged. At each of the these stations was their formal robes, a distinct gold colored hat shaped like a banana, their book of scripture, and a wooden bowl used at meal times. Below are a few photos from inside the prayer hall. These halls can be quite dark, but my Nikon P300 with it’s f/1.8 lens (on the wide end) did an okay job in these dim places, though they are not the greatest photos. The fastest lens I had on my Nikon D90 was a Sigma 17-70mm f/2.8-4.5. This was not quite fast enough to get clear shots inside most monasteries. As usual, click on any photo for a larger and better view.

Inside the prayer hall

Tools fo the trade—robes, scriptures, and a wooden bowl 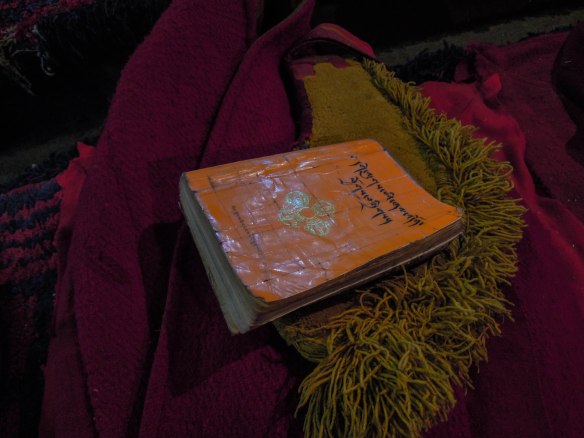 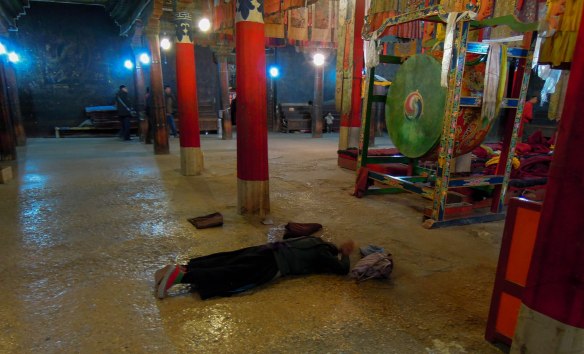 In another smaller hall I met a group of teenaged monks chanting their scriptures under the direction of an older monk who was leading the group. When they took a break, they were very animated and I had a fun time teasing them. They asked where I was from and when I responded that I was an American, one of the boys pointed to another sitting next to him and said he was an American too. I looked at him and said,

“Really? He looks more like a Canadian.” Pointing to another I said, “And he looks like a German, and he a Frenchman.”

They were roaring with laughter. 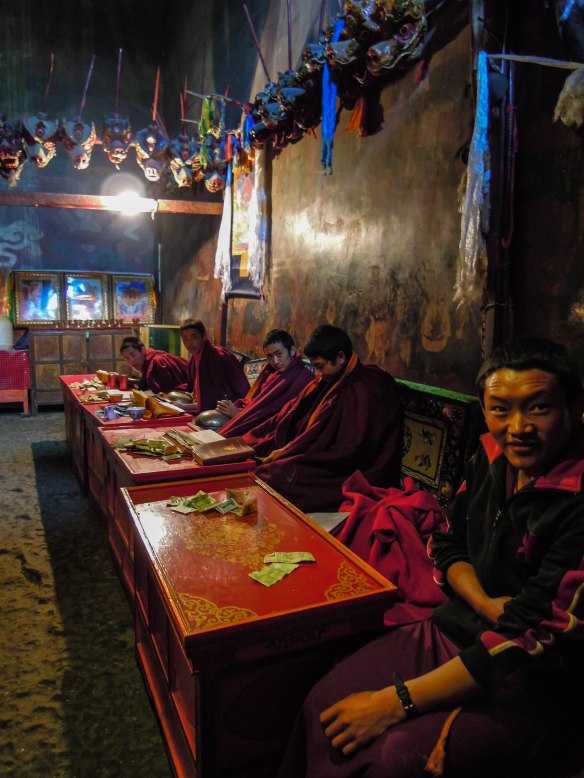 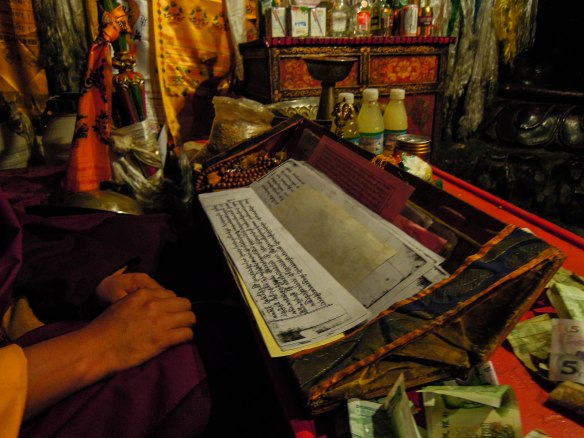 An older monk was leading them in their chanting with these leaves of scripture. Tibetan Buddhist scriptures are often loose-leaf like this.

Entrance to the main prayer hall at Pochu Monastery 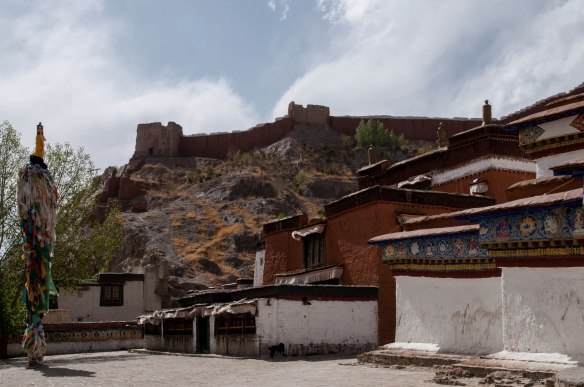 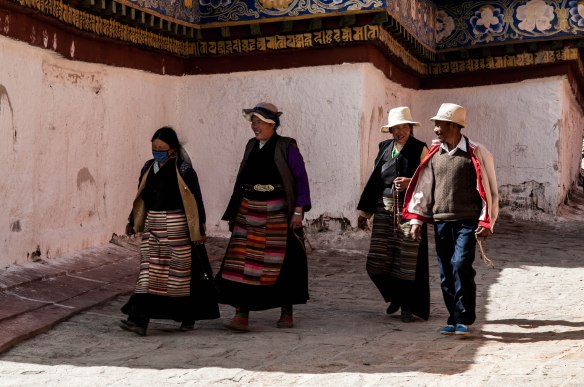 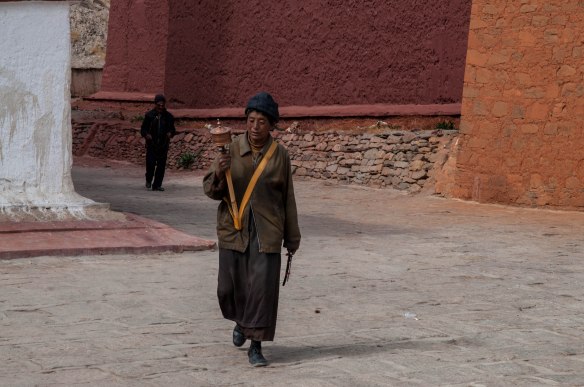 Pilgrims exiting one of the prayer halls

The ancient Gyantze fortress rising above the city.