Just getting to Kailash was quite an adventure, consisting of driving overland from Lhasa in Toyota Landcruisers for four days covering 1436 km (892 miles). I’ll save that for another post. In this post I will describe the actual kora around Mt. Kailash.

Mt. Kailash is a sacred mountain, considered the heart of the world and the headwaters of four major Asian rivers (the Indus north, the Brahmaputra east, the Karnali, and the Sutlej west). For Tibetan Buddhist, Hindus, Jains, and the Tibetan indigenous religion Bon, it is considered the most holy of pilgrimage sites. It is said that a kora around Kailash will erase your sins, and 108 koras breaks the cycle of rebirth and assures one of nirvana at death. Buddhists, Hindus, Jains, and believers of Bon all converge on this holy mountain to make the circumambulation. Young and old alike practice their devotion by making this pilgrimage. We saw pilgrims from all over Tibet making the long, arduous journey to Kailash.

First look at Mt. Kailash, the south face, on the way to Darchen.

The starting point of the kora is the small, nondescript Tibetan town of Darchen. It consists of two streets, one of which is paved for about one and half blocks, then deteriorates into a rough dirt road.

The upper part of town

We arrived in Darchen in the afternoon and stayed in a very rustic Tibetan guesthouse. It consisted of a bare concrete room with four single beds, a single lightbulb, a washbasin, and a thermos of hot water. Typical Chinese pit toilets were located a short walk across the courtyard. For those of you who are familiar with Chinese squatter toilets know that they can be very smelly, to the point that it is difficult to breathe when doing your business. Well, try not breathing in a very stinky, dirty pit toilet at 15,000′. Not a simple task.

We ate in the Tibetan teahouse located at the guesthouse. The next morning, five of us set off for the Kailash kora. Traveling in Tibet requires that you have a guide with you at all times. Our guide was a thirty something Tibetan man named Tenzin. He was a very pleasant guy. He knew his Tibetan history and was very attentive to our needs. He was also a devout Buddhist and this kora for him was number 68. He had completed it in as few as 14 hours, and had done full prostrations around the mountain in 8 days (it usually takes 14-16 days). He was pretty hard core. Also traveling with us were four Nepalese young men (2 sherpas, and 2 Newaris) that arranged all our camping gear. In Darchen Tenzin hired three yak herders and 6 yaks to carry our gear. This felt a little funny to me as I have backpacked a great deal in the U.S. and am used to being totally self sufficient and carry my own gear. But this is how it is done in this part of the world.

The beginning of the kora was about 3 km from town and began in a wide river valley.

Beginning of the kora

At the start of the kora

We carried day packs, while the yaks carried all our camping gear. My day pack consisted of snacks for the day, warm clothing including a puffy jacket, fleece jacket, and a hardshell jacket, and my photography equipment.

It stared off very easy up this wide valley with little elevation gain. It was a beautiful sunny day. At 15,000’+ it is never too warm, but it was very pleasant. For most of the day I hiked with just a lightweight long sleeved base layer and a fleece hoodie.

Looking back down the valley we hike up

Dramatic rock faces below the west face of Kailash

Close up of the west face of Mt. Kailash

We followed this partially frozen river up the valley

After about 8 km we saw the first of many prostrating Tibetan pilgrims. The ultimate in devotion is to do the entire 52 km kora in full prostrations. This consists of laying full length on the ground, over and over again covering the entire distance. These very devoted pilgrims will usually hike ahead estimating how far they will be able to go for the day, stash their camping gear, then walk back to where they started and begin their prostrations. They will typically wear a heavy apron to protect their body from the rough ground. They will also wear shoes or sandals on their hands to protect them as well. I was amazed at the devotion of these sincere, religious people.

Prostrating pilgrim taking a call on his cell phone

After about 12 km the trail began to turn east and climb up another river valley. Along this portion we began seeing Hindu pilgrims on the way down. According to another Tibetan guide that we met, these Indians did not want to go over the pass as it was snowy and icy and they were on horseback. It’s no problem with yaks, but quite serious for horses. Most Hindu pilgrims ride horses, instead of walking.

After hiking about 20 km, and climbing to 16,700′ we arrived at the Drirapuk Monastery. It was not a very steep climb, but was steady and with the altitude it was certainly no walk in the park. Slow, steady hiking was the key. Try to go too fast and you were very soon out of breath. The views of the north face of Mt. Kailash from the monastery were spectacular.

Drirupuk Monastery is set high on the cliffs across the valley from Kailash. It is a very small monastery with only a few resident monks. They were friendly and were willing to allow us into the monastery to look around.

Pilgrim at stupas. Monastery in the background

Monk waving from the roof of the monastery

From the monastery we had to hike down to the bottom of the valley, cross a frozen river, then up the other side to a group of tent teahouses.

Tent guesthouses at 16,700′ below the north face of Mt. Kailash

We met up with the yaks and headed up the valley about a half mile to a meadow area where we set up camp. It was a beautiful, wild setting surrounded by high peaks.

The view from my tent door

I felt pretty good for most of the day, but by the time we got to camp I was pretty tired. My legs felt fine, but the altitude was really getting to me. I had a headache and was not too hungry. My friend gave me a Diamox tablet (for altitude sickness), and it really helped. By morning my headache was completely gone and I felt great, full of energy.

See lots more photos of the Mt. Kailash kora at: 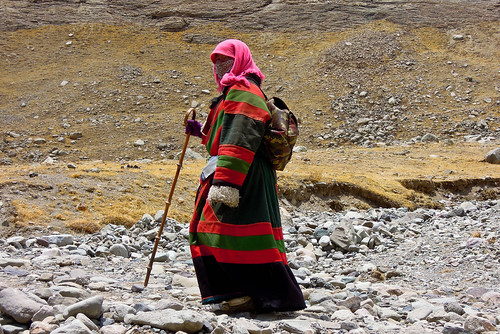